It was a beautiful day today. So after a morning of yard work, a refreshing shower, and a delicious lunch (Hanna’s Mock Tuna Salad), I topped it off with something quite exciting: a trip to the dump with my husband. The plan was to tolerate the chore, then take a little drive around town to photograph something curvy for today’s photo challenge prompt. I eventually got the photo below, but not before dump diving and snatching up three chairs, a mirror, and two hope chests, which I plan to refurbish and sell. I know. I already have way too much to keep me busy, but something’s got to fill the gap when this photo challenge is over, right?

P.S. The guys who work at the dump were chuckling as we left. They know I’ve given my husband strict instructions to never, never bring things home from the dump. Come to think of it, my husband was chuckling, too. 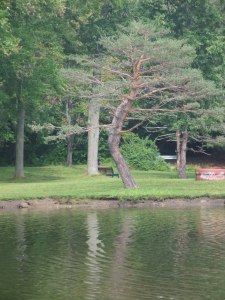 Writing prompt: You would think this is an ordinary tree growing beside a pond in a park. But you’d be wrong. Oh. So. Wrong. It’s a bonsai tree, carefully trimmed and shaped by a giant. Yes, I said giant. Heretofore, he has proven his skills that earned him the Stealth badge in Giant Boy Scouts. But today you brought a blanket and a good book to the park, and when a giant shadow shaded your pages, you spotted him reaching through the clouds with his little clippers. “Hey!” you yelled. What happened next?  Go. Write. Have fun.